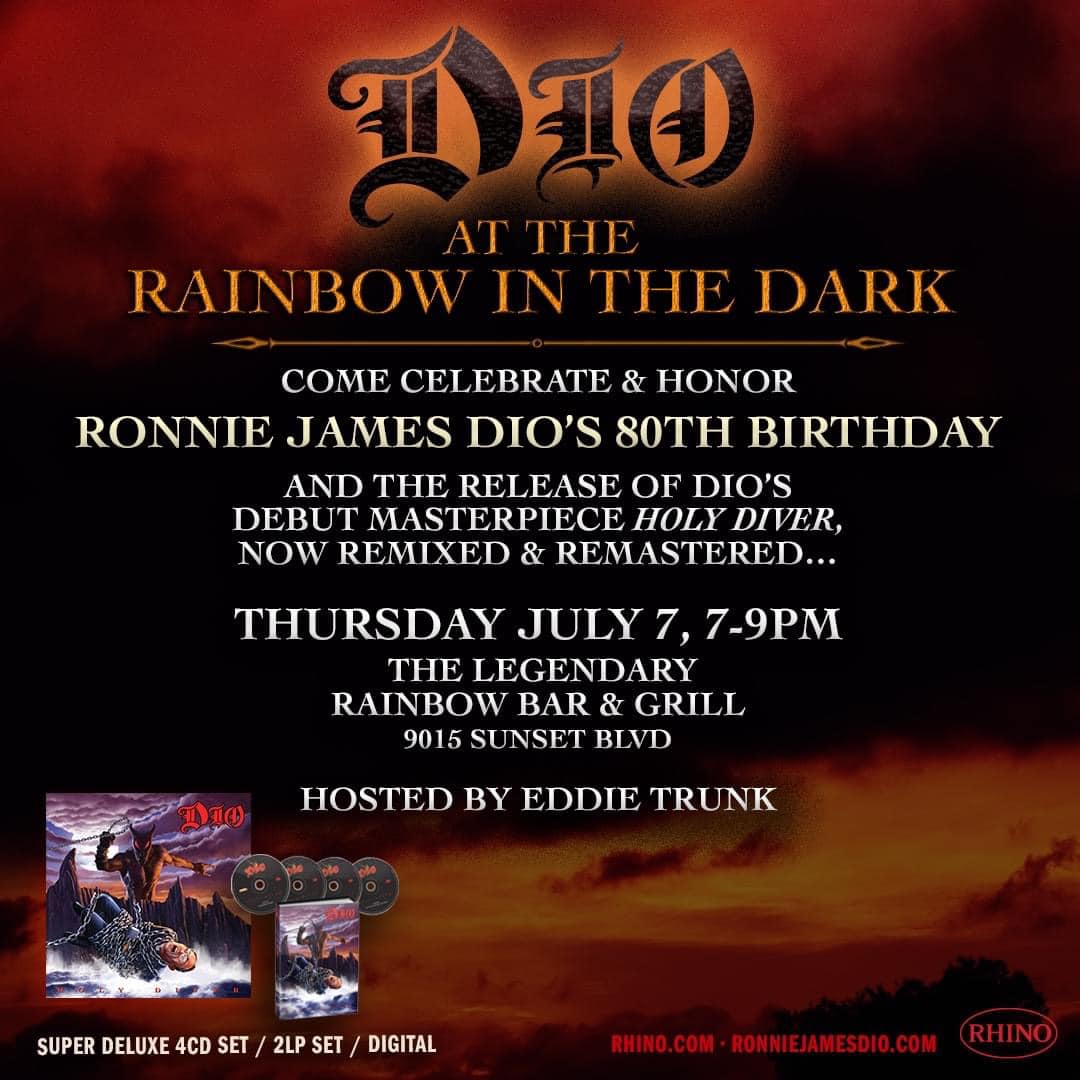 Ronnie James Dio would have turned 80 years old on July 10. To celebrate this historic day, the legendary Rainbow Bar & Grill on Sunset Boulevard in West Hollywood will host AT THE RAINBOW IN THE DARK, a special event for Dio family, friends, and fans, on July 7 from 7-9PM PT. The event will be open to the public with limited capacity. Click here for more details.

The Legendary Rainbow Bar & Grill On The Sunset Strip In West Hollywood Will Be Open To The Public For This Special Event On Thursday, July 7

Iconic Dio Music Videos For “Holy Diver,” “Rainbow In The Dark,”
And “Stand Up And Shout” Have Been Newly Remastered & Upgraded To HD

AT THE RAINBOW IN THE DARK will be hosted by one of Dio’s dear friends, SiriusXM host Eddie Trunk, who will spend the evening in conversation with some of Dio’s musical collaborators and friends, with a full list to be announced soon. The complete conversations will be featured in a special ‘Trunk Nation LA Invasion,’ airing on SiriusXM Volume (channel 106) on Friday, July 8th at 2pm ET, with replays over the weekend and available anytime on the SXM App.

AT THE RAINBOW IN THE DARK also falls on the eve of Rhino’s release of Holy Diver: Super Deluxe Edition, an expansive 40-track boxed set of Dio’s classic debut that will be available the following day (July 8) in 4-CD and digital formats.

Additionally, the iconic Dio music videos from the album (“Holy Diver,” “Rainbow In The Dark,” “Stand Up And Shout”) have all been newly remaster and upgraded to HD. Click here to view now.

Among the greatest heavy metal singers of all time, Dio’s career spanned five decades, touched millions of fans and pioneered his signature “devil’s horns,” one of the most popular hand gestures in the world. Dio also provided vocals, lyrics, and melodies for some of the most iconic rock albums of all time with Black Sabbath and Rainbow, before establishing his own band Dio as a metal force with their 1983 debut Holy Diver.

In addition, Barresi’s new mix of Holy Diver will also be released on July 8 as a 2-LP set on 180-gram vinyl. It includes the original nine tracks, plus the 1983 B-side version of “Evil Eyes” as a bonus track. Side four is decorated with an etching of the legendary demon Murry that graces the album’s iconic cover. The vinyl is kept in a gatefold sleeve that shows off newly commissioned artwork by longtime Dio artist, Marc Sasso. The same artwork is also used for the 4-CD Super Deluxe Edition.

In the illustrated liner notes that accompany the Super Deluxe Edition, music journalist Mick Wall shares the album’s creation story, including the making of its crown jewel, “Rainbow In The Dark.”

Holy Diver: Super Deluxe Edition goes beyond the original album with a previously unreleased recording of the quartet performing live in 1983 at Selland Arena in Fresno, California during the Holy Diver Tour. Wyn Davis mixed the concert recording, which spotlights live versions of songs from Holy Diver (“Stand Up And Shout” and “Rainbow In The Dark”), Rainbow classics (“Man On The Silver Mountain” and “Starstruck”), and Sabbath staples, (“Children Of The Sea” and “Heaven And Hell.”)

The Super Deluxe Edition also revisits the Holy Diver recording sessions to uncover unreleased outtakes for several album cuts, including unheard takes for “Invisible,” “Straight Through The Heart,” and a version of “Rainbow In The Dark” that boasts an alternative guitar solo. There’s also an early version of “Evil Eyes,” a song that would resurface on Dio’s 1984 follow-up album, The Last in Line. A selection of rarities rounds out the new collection with mono and stereo 7” single edits for “Rainbow In The Dark” and a version of “Evil Eyes” that was released in 1983 as the B-side to “Holy Diver.”