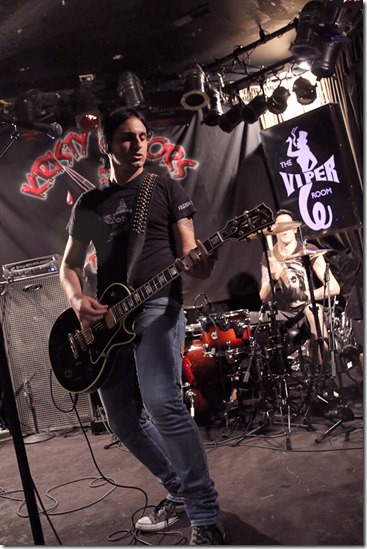 The legend of Hollywood Glam Rock has cornerstones and foundations that have stood the test of time against an onslaught of new music genres.  The 90’s brought a change in music that weathered the scene and diluted the promise of hardcore glam-rock songwriters stomping their boots on stages for throngs of show goers and hard rock music fans; but guitarist, singer and songwriter Kristy Majors has done more than stay the course, he continues to define how the game is played, and he does it with winning results.

On Saturday, June 21st, Majors took the stage with an all-star band of gypsies that continue the original trend of ‘in your face’ and ‘mother disapproved’ wang-dangling hard rock.  Proving in 2014 that Rock and Roll can still set the night on fire, Majors wowed the crowd alongside guitarist Nick Rozz (Bullet Boys), bassist JK Famous (Pretty Boy Floyd) and drummer Ben Graves (Murderdolls).  The result was a modern day view of the stories that have sold millions of books for artists like Motley Crue drummer Tommy Lee and Poison’s Brett Michaels.  With the release of the new CD titled Kristy Majors and the Thrill Kills, hard rock fanatics are welcoming Majors back to the scene with gratitude.
Majors came West to Hollywood during the 80’s glam explosion from New York, where he cut his teeth on the sounds of bands like the New York Dolls and the Dead Boys, blending the hardcore punk styling’s of CBGB’s most popular bands with the longstanding shock rock of artists like David Bowie.  Assembling a group of like-minded peers, he built a legend with the band Pretty Boy Floyd and branded the Sunset Strip GLAM style for the world to see and hear.  Signing to MCA and selling more than half a million records, tapes and CDs with their initial release Leather Boys with Electric Toys in 1989, PBF raised the bar on the look, the sound and the passion for delivering a hard rock showcase, and it remains highly collectible today, twenty-five years later.
As the nineties swept through with Grunge Music, Majors continued to write and record his unique brand of tight rhythms and piercing solos and over the next twenty years would do more than just release seven additional CDs with Pretty Boy Floyd, one with Shameless and four CDs under his own name; Majors founded a clothing line, a high profile National and International booking agency, a state of the art recording studio and produced dozens of today’s top jazz artists as an A&R Representative at Sony Records, proving his worth in music as a whole and not tethered to a single genre’s sound.

Music journalist Joe Dolan pinned Kristy Majors down for a few questions to bring fans up to speed before the next wave of Hollywood Hard Rock took the stage.

Joe: So the question is Kristy, why now?  When you’ve had so much consistent success outside of the negativity related to being a glam/hard rock recording and performing artist in the sea of modern trends and one hit wonders.  What drove you to create another Majors stamped CD in an industry that shuns hard rock artists from our generation?

Majors: Music has always been a staple in my life, and everyone’s everyday life. Whether it be in a movie, a commercial, a TV show, a stage play, or whatever; you can express anger, sadness, suspense and just about every emotion with a few words and 3 notes.  I’m always writing and recording music in my free time and that will never change.  I’m a tortured soul and an insomniac!  I felt like I had something to say with this album and I hope other people grasp on to it as well.  I don’t care about trends or what everyone else is doing.  I find most music today all sounds the same.

Joe: The CD is self-written; self produced and recorded in your own studio with Kari Kane (Pretty Boy Floyd) on drums and percussion.  Did anyone else contribute to what we hear on the CD?

Majors:Kari played the drums and I did everything else.  It’s a tedious process, but I’ve always said that if you want something done right, do it yourself.
Joe: What tender cares did you address to make sure it was exactly how you wanted it to sound?
Majors: I really just went for a stripped down sound.  There is no fancy production at all, just two guitars, a bass, drums and vocals.  Think AC/DC, Sex Pistols, The Stooges, The Ramones, Johnny Thunders … everything that inspired me when I was a kid.

Joe: You clearly hand selected a group of hard rock all-stars for the on-stage performances.  What led to choosing the artists that will play alongside of you?
Majors:Simple, I wanted to surround myself with people I actually like and that I can trust.  Creating a band alongside Nick Rozz, J.K. Famous and Ben Graves turned out to be a good choice.

Joe:You’ve seen the Hollywood music scene evolve and change since establishing your dominance of the glam/hard rock circuit.  What are the issues that plague the scene today that you recognize, how do you feel it went wrong and what can kids do today to start finding success

Majors: People are lazy.  No one wants to work for anything anymore.  They think because they get a few likes on social media sites that they’ve made it.  Everyone wants to be famous for nothing (he scoffs).  Here’s some news – get up off your ass! Get your fucking face away from your phone and join reality.  Oh, and somebody please kill off the Kardashians! (he laughed out loud)

Joe: You chose the Viper Room for the CD release.  The obvious long-term status of the club makes it a winning choice, but why the Viper Room?
Majors:It’s a nice intimate environment with a great sound system that clearly showcases a band.  I really like performing in a more intimate setting, like the Viper.  It’s a more personal interaction with the crowd and the crowd appreciates it.

Joe: What can people expect from the band after the CD release performance?
Majors:We’ve got a few music videos on the way and there has been some talk of taking the show on some small tours.  Nothing is in concrete yet but keep an eye out to see what develops over the next few months.

Shortly hereafter, the band took the stage.  Armed with bare bones utilities and ready to melt faces off the crowd, Majors uses a Les Paul, Marshall Amps, a Tube Screamer and a DD-3 Delay.  The lights fans saw flashing didn’t come from stacks of equipment, it came from the barrage of cameras and cell phones capturing a long lost moment in time.  With the strings that rang bells in 1989 and took MTV by storm, the guitarist that killed with Pretty Boy Floyd was simply slaying the audience tonight in that old familiar style of tattoos, long hair and strapped leather that makes the girls howl.
Here’s the set list they performed.

Since the 2013 falling out of Kristy Majors and former band mate Steve Summers, Majors has stepped outside of the drama and proven beyond a reasonable doubt that he’s the same powerhouse songwriter and stage talent he’s always been.  This first no holds barred performance of the band is just the beginning.  Majors shared that they have three more shows lined up for San Diego, Las Vegas and back in to Southern California and the new CD release holds promise for more dates to follow as the summer season is in full swing.

Keep up with Kristy Majors and the Thrill Kills at Majors’ official website and Social media pages by visiting: 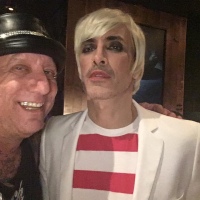